If you've been reading this blog for a while, you know I love all books by Eric Walters, so when I saw this new one, I had to order it.  I read it in one sitting and as I was reading it I was already thinking about who I would recommend it to.

This book is set in 2002, just 5 months after 9/11 and the main character is Shirli Berman.  Shirli is a grade 8 student who loves dancing, singing and acting and has just auditioned for a part in Fiddler on the Roof, a story about a Jewish family living in Russia in 1905.  As Shirli's own family is Jewish, she seeks the advice of her beloved grandfather - Zayde.  He has always been very quiet about his past.  Throughout the story, Shirli's life revolves around practices, boys, rivals and friends, she also starts learning about the history of Zayde and what he and his family went through during World War 2.   The secrets Zayde shares comes as a real surprise to Shirli and her family, but does explain a few things about her grandfather and helps Shirli better understand the role she is playing.

This story was absolutely brilliant, weaving in the way Jews have been treated throughout history, the terrorist attacks in New York and how Muslim people were treated in the aftermath of that event as well.    I loved the relationship between Zayde and Shirli, reminding me a great deal of my own relationship with my grandfather, who was also very silent about the role he played in World War 2.

With November coming up soon, this book would make a perfect read aloud for grades 6-8. 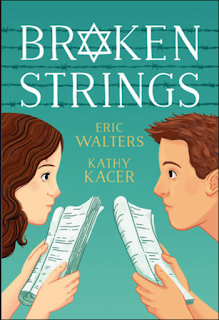 Posted by Kerry Zinkiewich at 1:20 PM 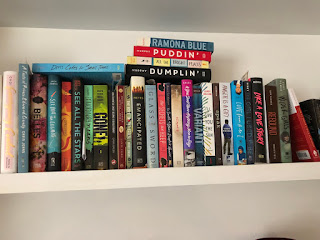 I have a bit of a problem with online shopping...must not buy any new books until I've read all of these!